The annual show for consumer and business electronics in Hannover offered quite some surprises in this year’s edition: the fairground of business activities seemed to be smaller than in previous years, whereas the show’s business fields of digital economies seem to expand every year into more everyday application areas. There was no Microsoft hall to be found on the fairground this year, but there were many Hololens applications to be shown around at numerous booths. Mobile VR headsets had been mostly replaced by Oculus CV1 and Vive installations, now becoming a sort of standard equipment for many booths along with flat screens and beamers. And there was a whole area specially dedicated to VR and AR activities in Hall 17, bringing together start-ups and hardware manufacturers, content agencies and gaming platforms, service suppliers and Meetup-enthusiasts. This year’s CeBIT was transforming into a testbed for headset comparisons and provided benchmarks of immersion into the emerging business field of the VR renaissance. 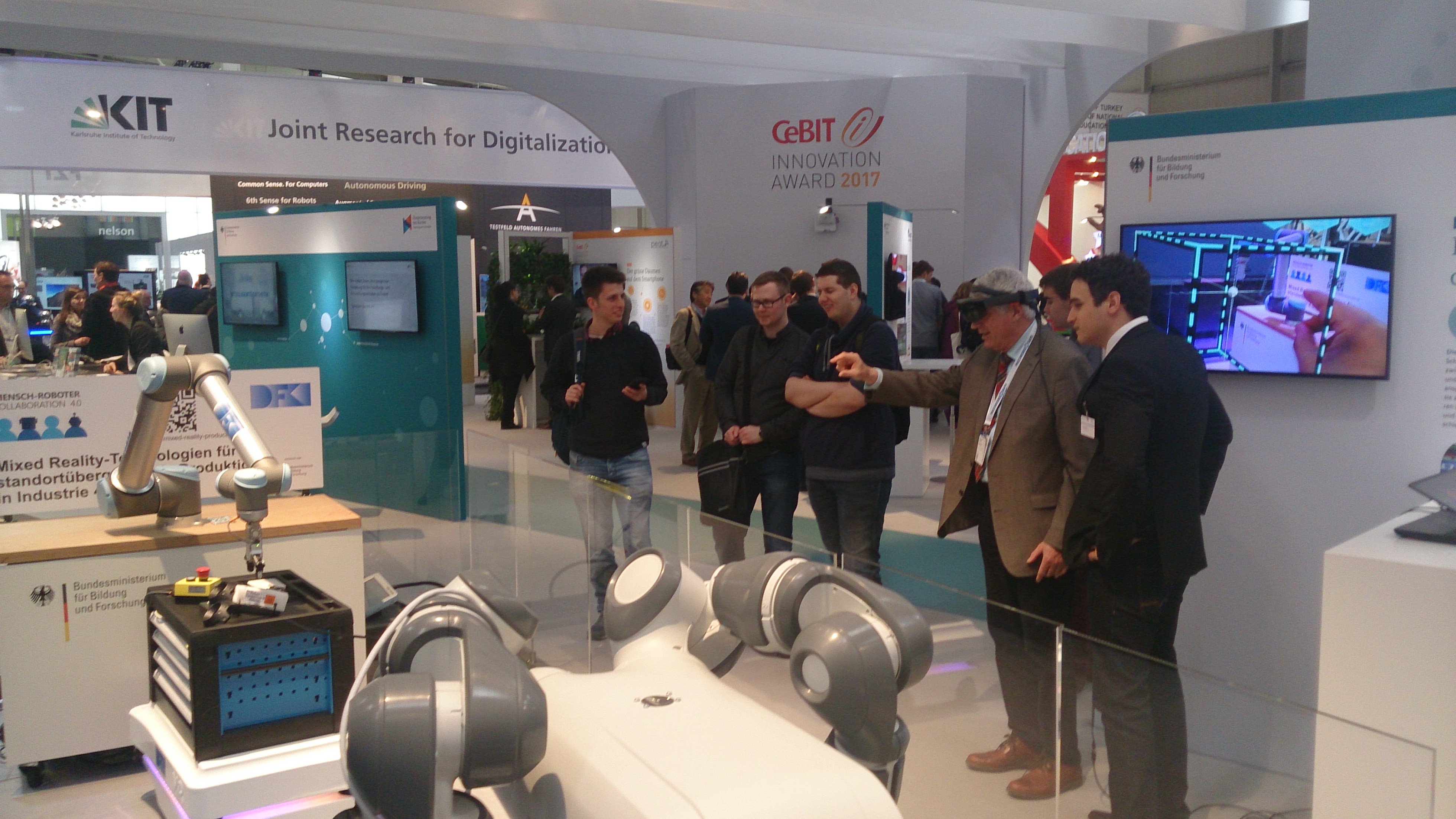 Headsets everywhere on the trading floor

Starting with the special VR area in Hall 17, the first thing you noticed was the rather broad thematic scope of presentations bringing together almost everything on this planet coming even close to the topic of VR: hardware manufacturers for headsets and peripherals lined up with the ad and video agencies for 360° services, drone equipment with headset remote controls, a complete VR cinema installation, VR hackathon prototypes, industrial simulation services, several gaming prototypes and a strictly organized arcade VR e-sport competition.

The next thing you realized was the lamentable fact that this enormous conglomeration of interfering installations resulted in a mishmash of tracking irritations, rendering it pretty much impossible to get a hand on something in VR working really well under these conditions of reciprocal signal overlaps. Especially for hardware manufacturers, this must have been a demo-and-die situation of a  presentation nightmare! 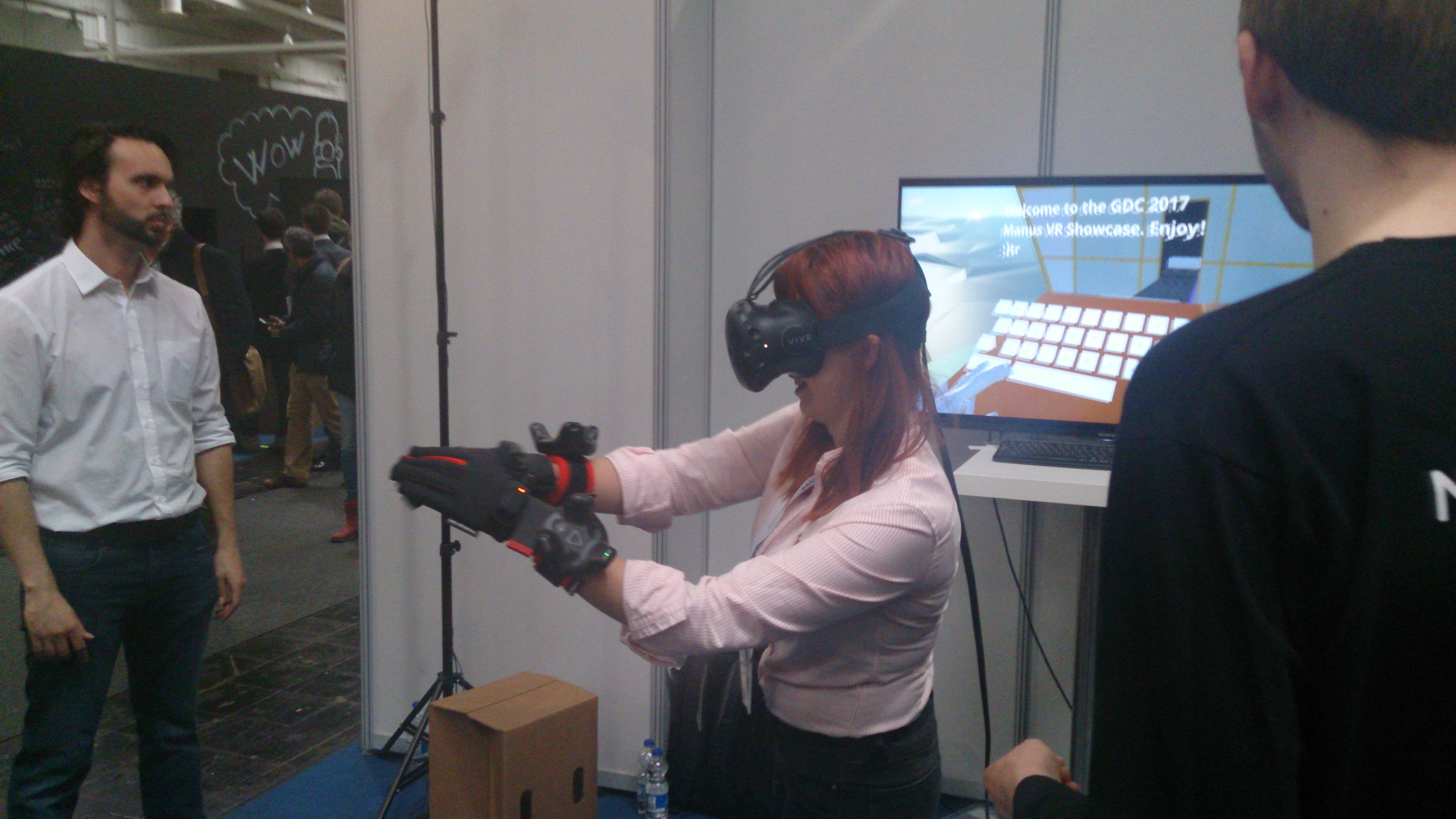 I tried to get a feeling for Manus VR’s gloves combined with HTC Vive’s trackers, but precise interaction was interrupted so often by signal disturbances that the company stopped demoing their product on site. At least, I could get a feeling for the fitting of the gloves which was very convincing and promising: the gloves are very light and suitable, offering 2 tracking points on each finger with rather robust and flat wiring sewn into the highly flexible synthetic fabric and a small cable connection plugin fixed on the back of the hand. The biggest part of the glove actually was the somewhat clumsy Vive tracker that had to be attached on your wrists after having put on the gloves. As long as the demo worked under the hall’s devastating tracking conditions, I sorted some suitcases with my hands and pressed some buttons and switches in a simulated baggage check-in station. But testing was not stable enough to really get a precise impression of the system’s actual tracking accuracy. It is certainly a nice piece of wearable device with more promising perspectives for even better comfort, taking into consideration the upcoming miniaturization of the Vive trackers in the near future. 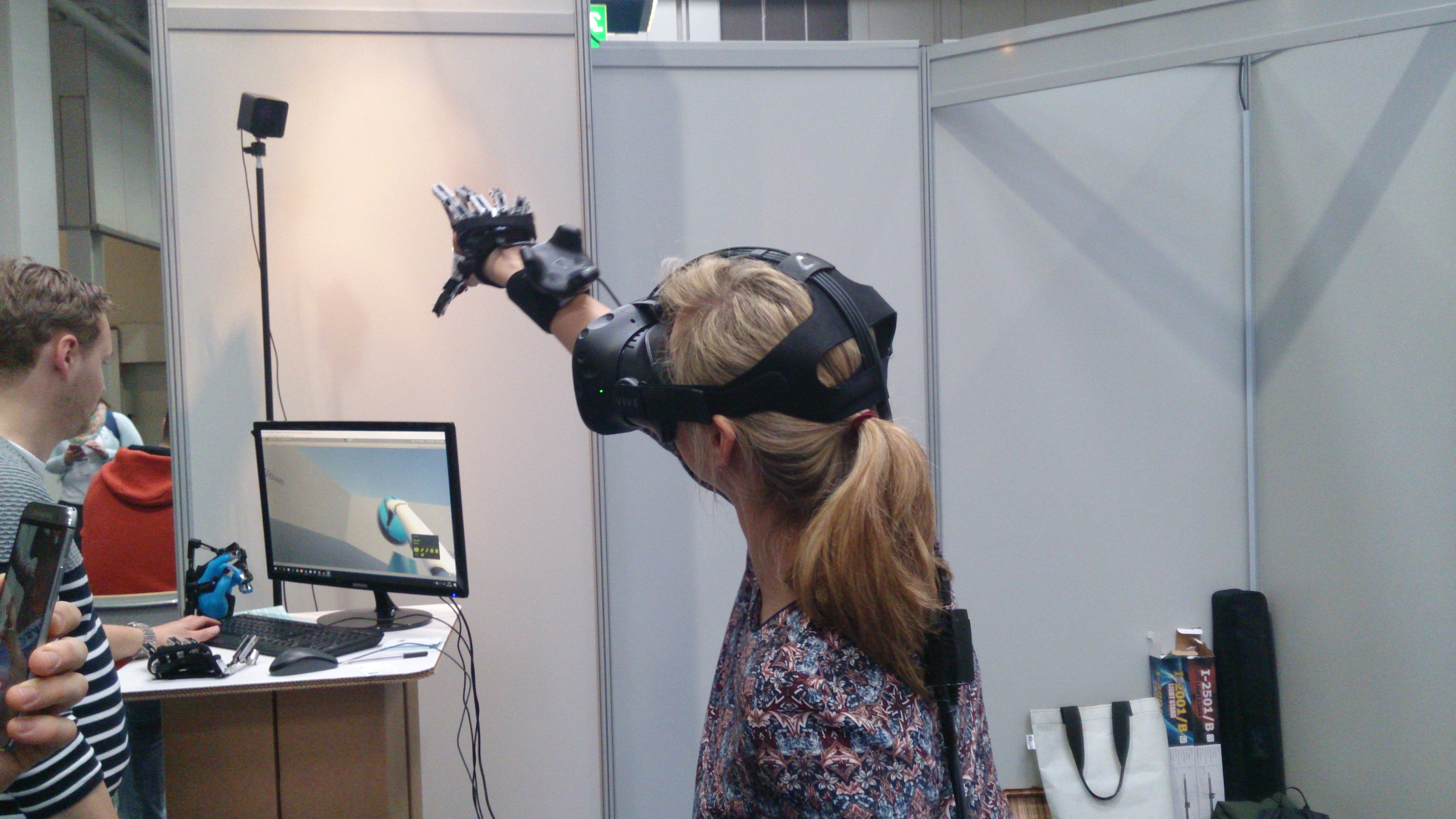 A direct comparison with another VR glove went better in terms of tracking conditions, but failed to convince in terms of wearability: Sense Glove was less affected by tracking disturbances caused by neighbouring booths, but the concept of using an exoskeleton on top of your hand for haptic interactions seemed to be focusing more on highly specialized industrial or scientific touching scenarios than for more generalized consumer applications. 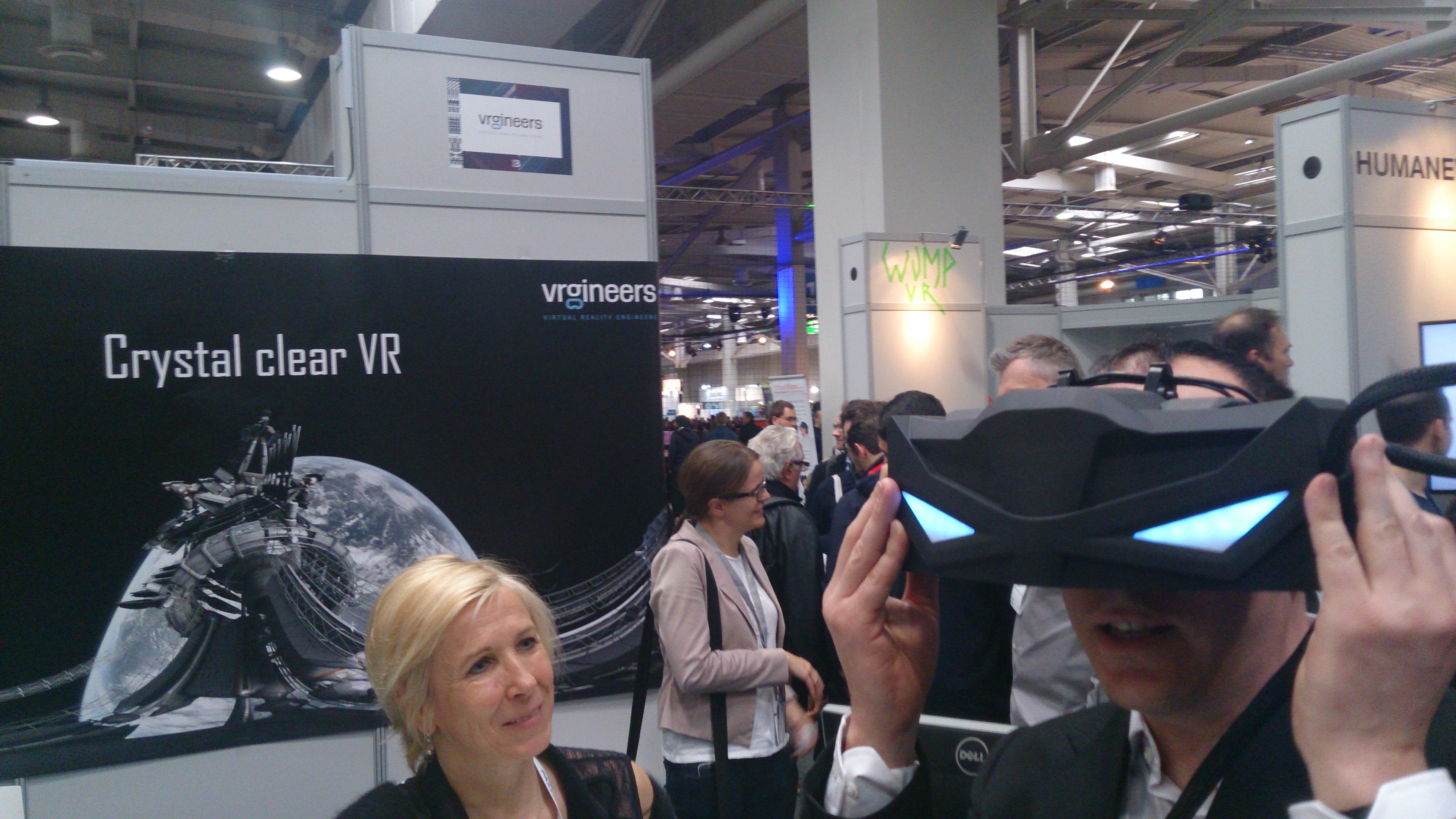 Another hardware manufacturer demonstrating the next generation of devices for VR was VRgineers, a Czech company displaying a wide-angle headset with highly impressing 5K resolution and 170° field of view for industrial appliers. The image quality was overwhelming, precise and sharp – as long as you did not move your head too much. There were quite some disturbances again with head tracking causing irritating frame rate lags: the photo-realistic quality of the image world broke down, ending the feeling of immersion rather quickly and abruptly. Again, the general conditions around the booth could not guarantee a stable environment for necessary tracking precision… 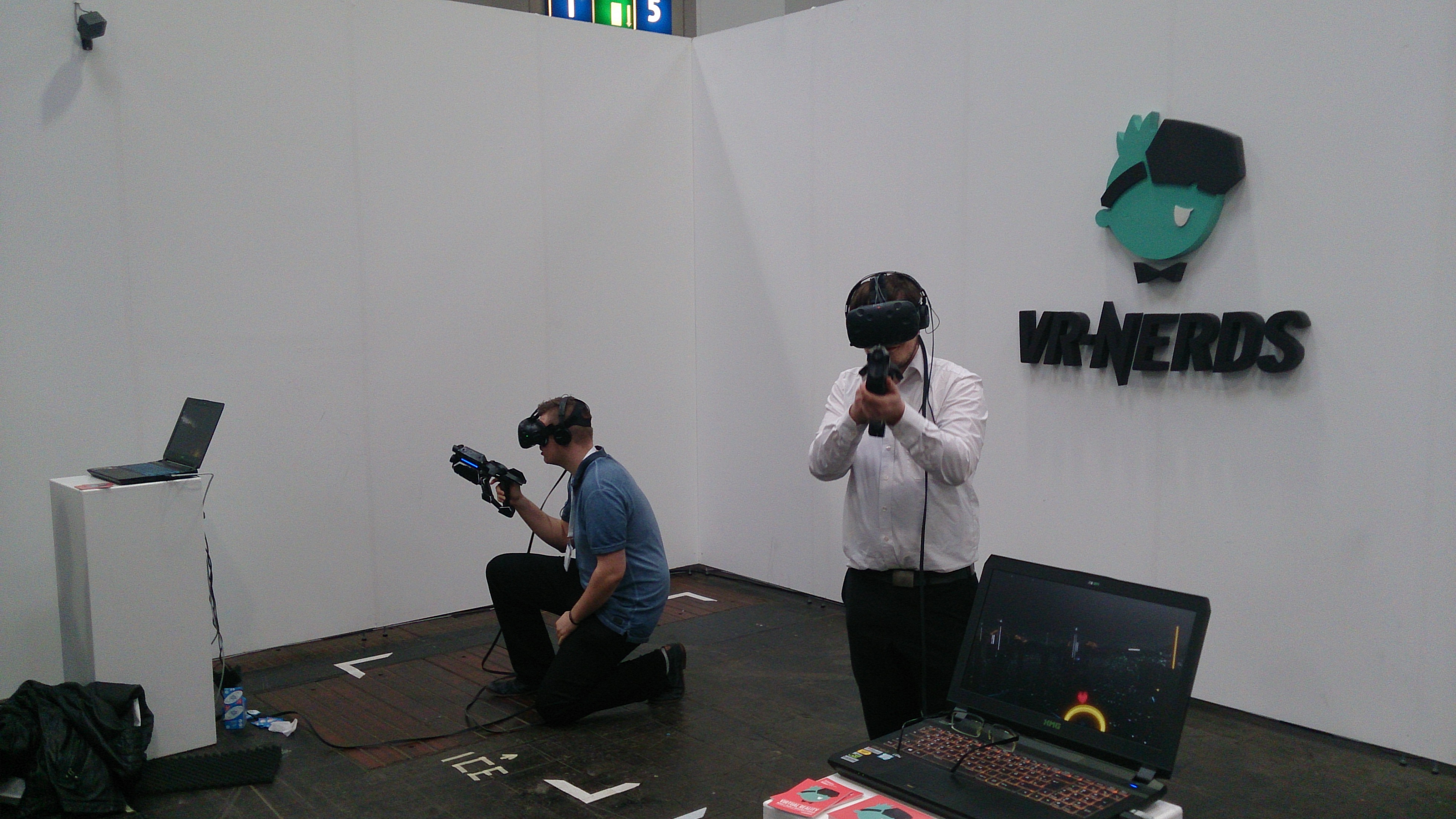 So, VR’s future was palpable only for moments of stop-and-go. Other installations used Oculus CV1 or HTC Vive in standard installations to present prototypes for music concert live broadcasting, architectural simulations based on photogrammetric environments or panoramic video platforms. VR Nerds’ multiplayer VR game ‘Tower Tag’ fortunately had its own area set a bit apart from the other booths to escape the tracking turbulences: the arcade shooter based on the Vive system uses specially designed plastic guns for the Vive controllers and real objects set up in the play spaces for better immersion; the game is comparable to a paintball experience where teams of 2 are positioned on a map with watchtowers, taking out the opposition party on other tower platforms in death matches known from e-sport competitions.

Difference engines on the show floor

While you could see and experience many Vive and Oculus installations on the general show floor apart from Hall 17, most of those showcased more the actual VR standard technology itself than any sort of special content application with relation to the respective booth’s business theme. 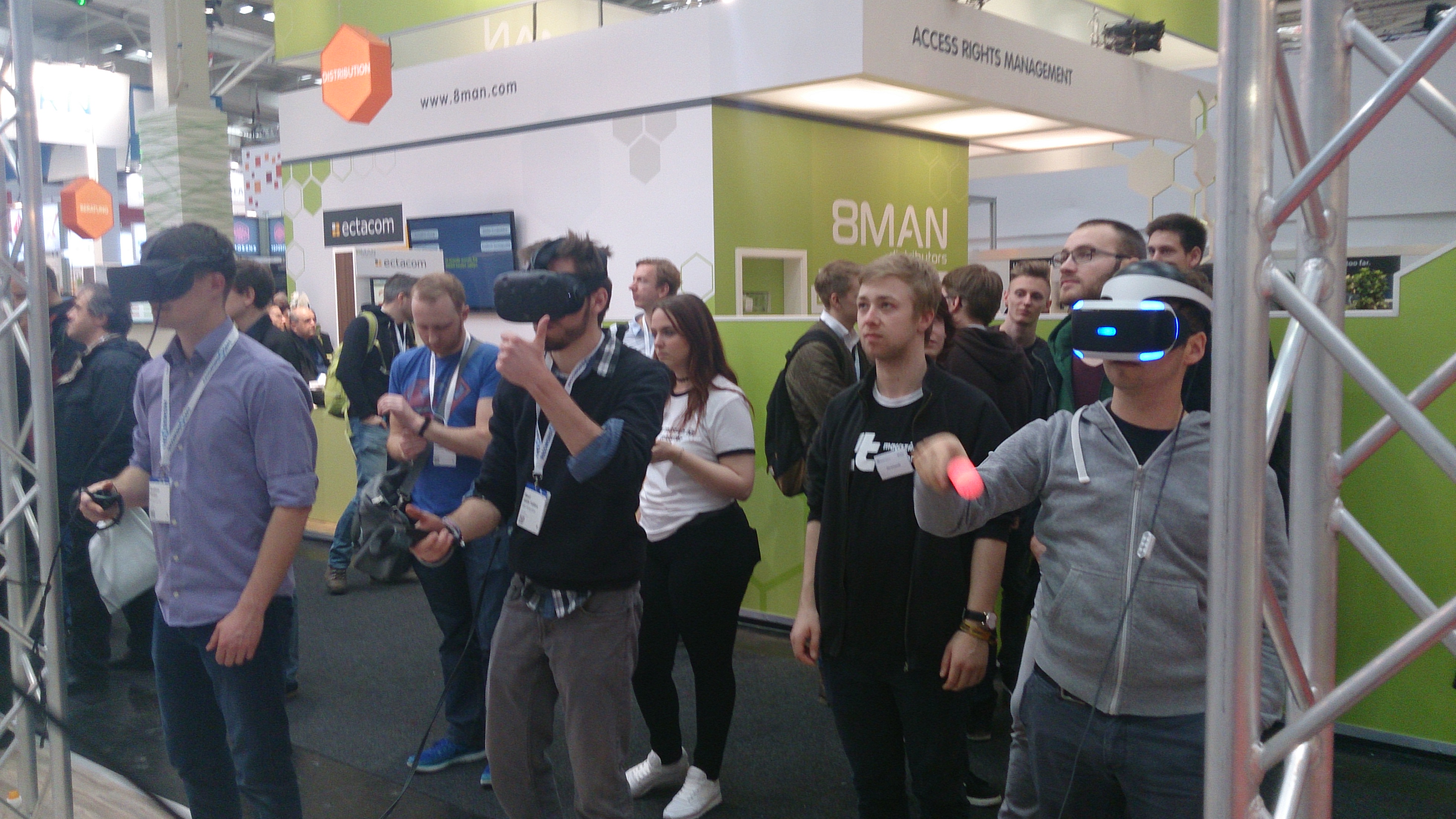 Comparing PSVR, Vive and OR

At the booth of c’t they even displayed all three main consumer systems in a parallel installation with the same content, so that the visitors could compare the same game ‘Holoball’ on all three platforms – the PlayStation VR, the HTC Vive and the Oculus Rift. Here again, the comparative approach was disturbed by massive signal irritations, so that the PlayStation camera system had troubles to keep up with the two other systems based on infrared tracking. The idea to present a comparison platform for the consumer or business applier is excellent, and CeBIT could well become a comparison platform for these emerging markets. But the technical conditions have to be mastered in a better way to provide equal conditions for each system. Otherwise, the comparison causes more confusion and misinformation than clarity. 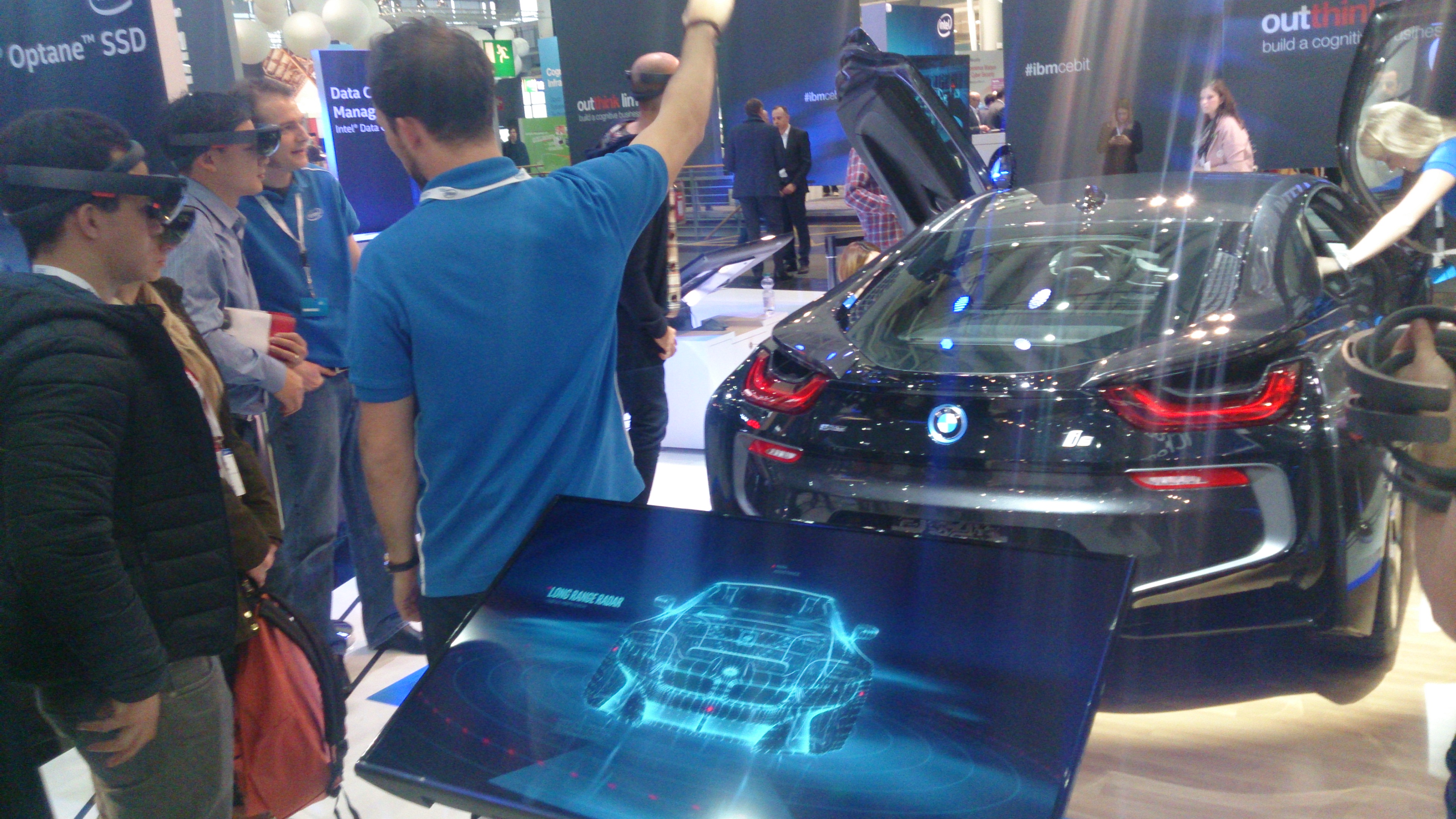 Among the many Hololenses shown around on the show floor, the Intel booth presented the most impressive Augmented Reality demonstration: you could walk around a car while receiving additional information data on the car’s interior parts and motor details through the Hololens, and you could sit in the real car surrounded by a wireframe traffic simulation projected through the glasses. Other applications for health and business scenarios had been discussed at the Serious Games Conference in R&D Hall 6, focusing on AR and Mixed Reality.

This year’s partner country Japan is known for its unique capability of making a difference and provided the trade show with some extra spices like social VR installations, sports simulations and Kabuki face recognition experiences. 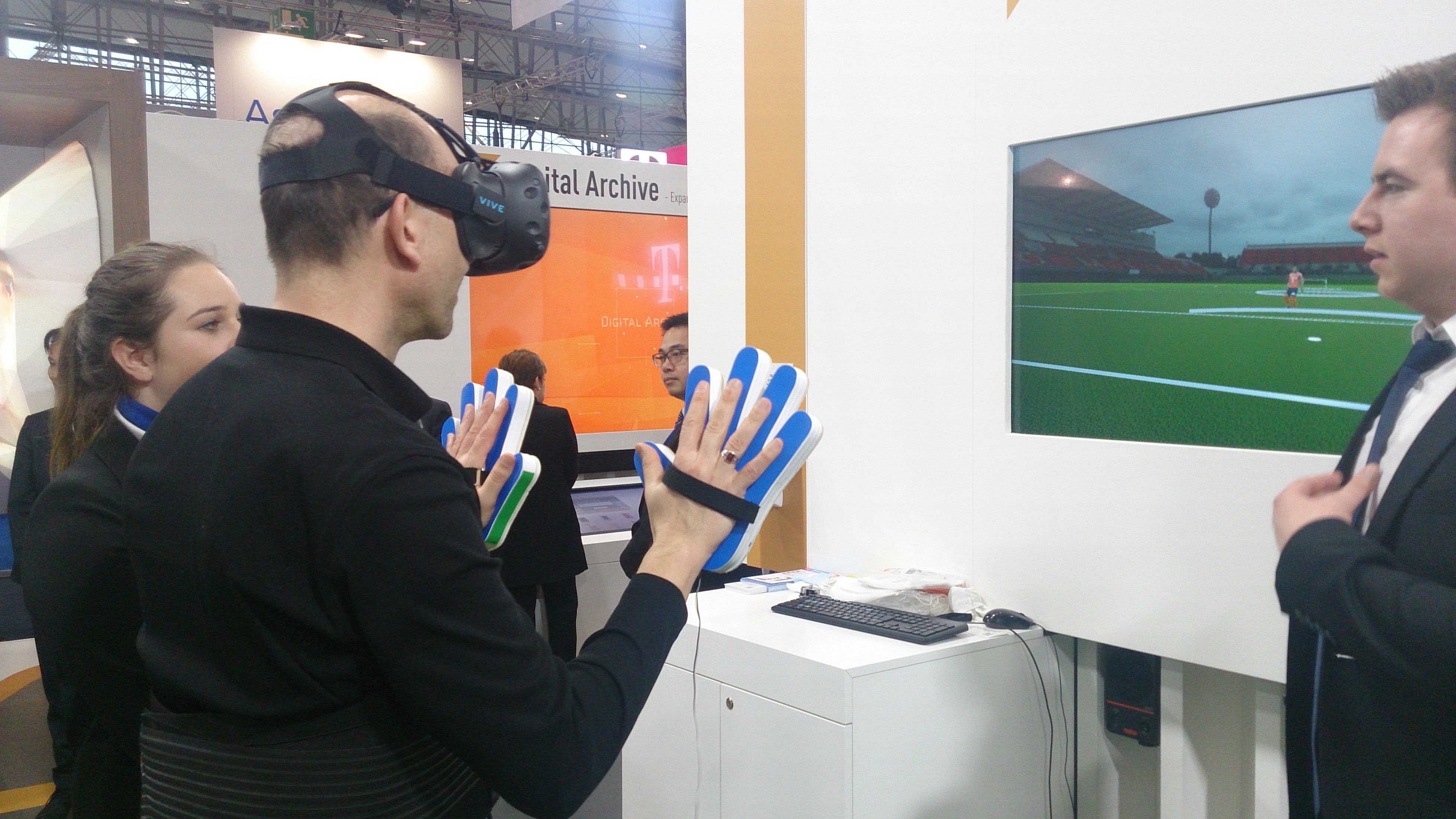 CeBIT certainly will change it faces next year: the annual show will be moved into summer and will be reorganized for a more event-oriented platform. VR, AR and Mixed Reality could very well help to promote this transformation by opening up a unique selling point for benchmarking VR, provided that an accurate presentation framework for this new consumer market and business field can be set up. 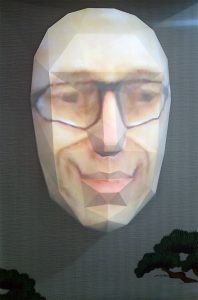