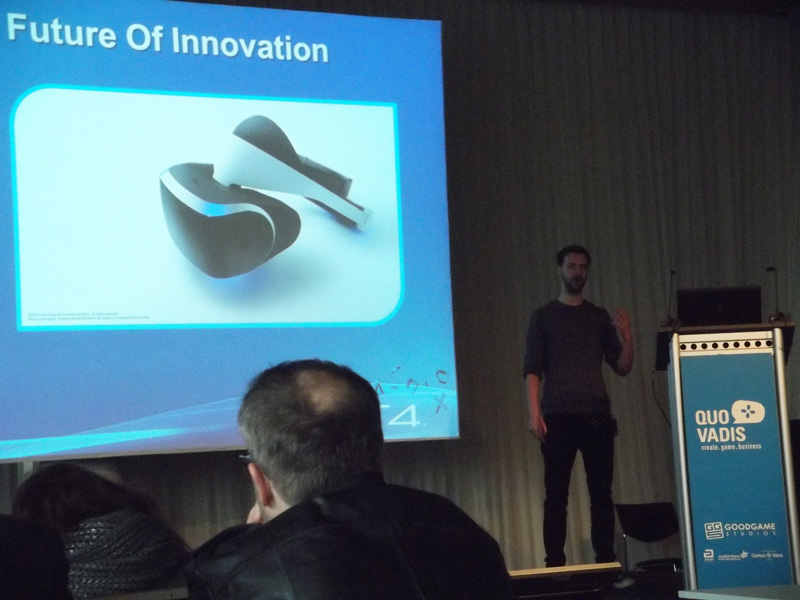 Sony Development Services Europe presented some more details on their upcoming new VR features for PlayStation4 at the Quo Vadis Game Developer Conference during the International Games Week in Berlin. The presentation focused on general design strategies for future VR developments without specifying the time frame for consumer product release.

Sony tries to prepare traditional game developers for a new platform experience that offers more possibilities for game immersion with 360° visuals provided by means of a stereoscopic headset. The design briefing gave a quick overview of Sony’s guidelines for VR world experiences in comparison to traditional game design. Apart from the visual aspects and the usual discussion on motion sickness, there was no further information revealed on particular interface or interaction modes for Sony’s VR peripheral.

A short demo report seemed to confirm the primary focus on visual immersion while restricting interactions to a bare minimum level for the moment: a deep-sea scenario immerses the player into a submarine environment in the role of a diver whose interactions and movements are limited by a surrounding cage. Unfortunately, we could not dive into the demo on-site as no hardware was presented…

Audience awareness was high and discussion rather active after the presentation. Interestingly, the Q&A part was influenced more by senior participants than junior developers, throwing in their experiences with former VR ventures in comparison to Sony’s cautious but systematic approach for a potential VR gaming platform.