Good old CeBIT made a fresh start with the 2018 edition. After having lost traction on both sides of digitization in industrial and in consumer markets, this CeBIT redesign aimed to regain a position of relevance between the  Hannover Messe of Industrie 4.0  and consumer electronic shows like IFA, MWC and CES. Half of the show remained a traditional trade floor centred around data administration and industrial hardware components. The other half was more theme-oriented with entire halls dedicated to topics like E-Mobility, VR/AR and start-up ventures, including a fairground for entertainment events and an extensive conference program. With VR pioneer Jaron Lanier even giving a keynote speech, the question was if immersive media could already be relevant for a reorientation of the new CeBIT, and vice versa, if this ‘business festival’ could become relevant for VR. 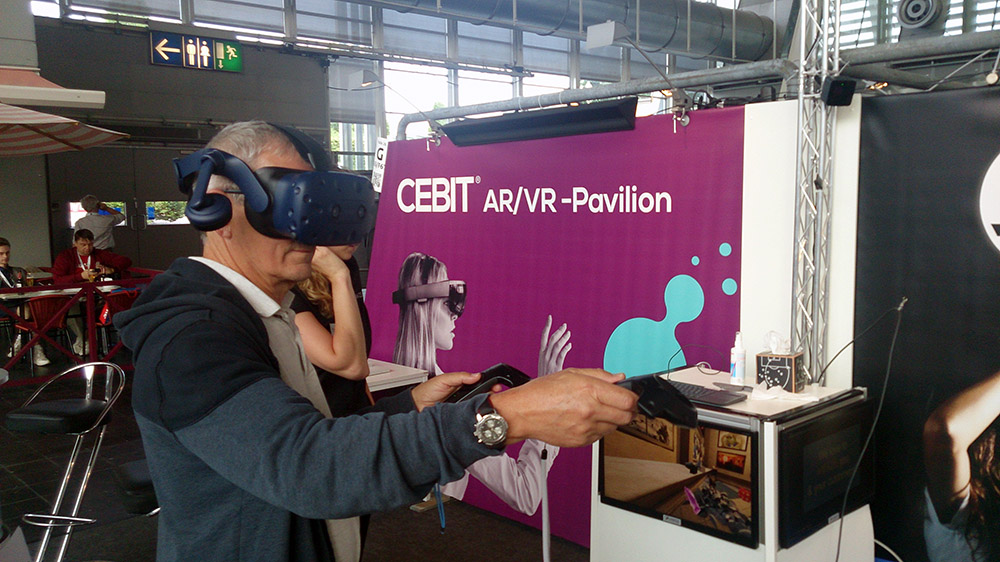 I expected to see a lot of Enterprise VR applications on the business floor. Apart from some start-up projects for virtual collaboration, I found mostly general application scenarios instead of actual use cases. VR agencies mostly used Vive Pro setups and presented primitive worlds for basic interactions to demonstrate the potential of VR as an industrial tool for manufacturing, production planning or corporate training. There was a sharp contrast between top-notch equipment and simplified demo scenes in the style of low-cost engine plugins. The general explanation for this gap between hardware and software levels was related to business communication and data protection: the agencies’ clients were not interested in presenting their use cases to the public in terms of trade secrets of their organization and production plannings. And, especially in the start-up section, you could feel quite some insecurity for data handling, just after GDPR (DSGVO) went into effect. 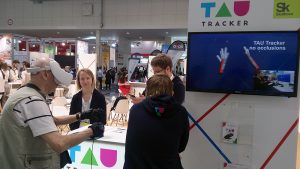 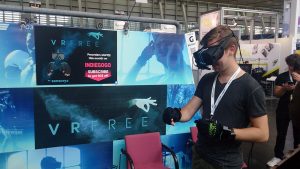 At least on the side of VR hardware CeBIT still has something more tangible to show. You could find and try out quite some interesting devices like prototypes for glove interaction, market-ready add-ons for wireless data transmission, market-proven headset enhancements for amusement rides or completely redesigned glasses for industrial production demands. 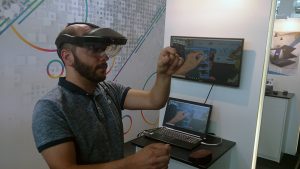 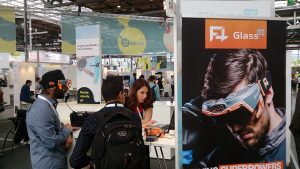 Marketing on the GO

The simplification of headset handling with battery-driven wireless devices led to a notable change in marketing with VR: most booths switched from mobile or high-end headsets to standalone. Oculus was present for the first time at the Facebook booth, promoting the new GO standalone headset mostly with video apps. They also showed a gamification training installation for logistics on the Rift with Touch controls. 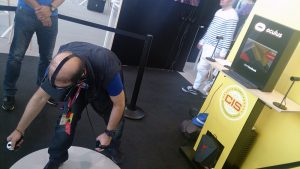 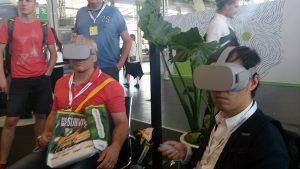 Besides using mobile or standalone headsets for showing video demos on-site, there were only a few initiatives to use VR for promotion on a larger scale. An enhanced version of a football table used Rift headsets in combination with table controllers to replace the real football table with an animated virtual one. You could switch players on the rows, watch explosions on the field and look around you while playing table football in a virtual stadium.

Intel used a rather simple VR promotion game with Rift headset and gamepad for the introduction of their server rack components. Although the puzzle game was very simple, you could not stop reconnecting with the experience when you later came across the game objects as real-world objects placed all around the fairground.

A place where VR can have legs

Walking around with VR headsets seems to be the new trend on the show. A Fraunhofer spin-off impressed with a large scanning area of about 200 m² where they could track about 10 people simultaneously with mounted GearVR headsets. The company markets a tracking system originally developed for factory size VR applications and working simulations. The installation is restricted to looking around with 3DOF headsets without controller interaction, yet. But it was already very impressive to walk through a virtual ghost house with turning walls and floors in the companion of other walkers while in reality, we were just swaying through an empty room. 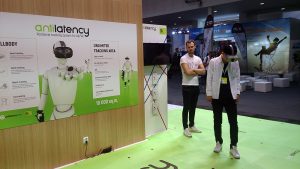 A Russian company offered a similar tracking system with infrared sensors integrated into carpet tiles. While walking on the carpet with a sensor fixed on your Oculus Go, you could make your way in VR through an abstract testing area with elevators, laser scans and narrow hallways. Again, interaction is not yet implemented, and player representation still very simplified in comparison to VR games. But the technology delivers exciting walking experiences with VR, up to the size of whole warehouses.

This year’s CeBIT got VR going. The show could provide an interesting line-up of hardware developments for industry and consumer markets. The portfolio of applications stayed a bit too basic for the current state of VR, partly due to legal confusion, partly due to cautious marketing on a redesigned platform. By levelling up the application scenarios, VR could also give CeBIT a leg up in the competition for relevance.