VR gets settled at Gamescom 2017

In comparison to last year’s trade show, Virtual Reality got a bit less attention at this year’s Gamescom. However, the new gaming platform established its continuous presence on the show floor, and the show’s preceding game developer conferences Devcom and Respawn dedicated an entire afternoon track to the subject of VR/AR/MR.

VR under development at Devcom/Respawn

Neither Respawn nor Devcom presented many original VR works in their gaming presentation areas. The lecture program focused on experience exchanges among developers instead. Technical challenges for porting games from mobile to Gear VR, locomotion game design problems and actual market conditions for VR productions were among the most notable issues for VR game developers. Sorting out the pains and gains of production for current VR platforms, the lectures painted a mixed image of the state of the medium one year after the main platforms had been established in the market in 2016. 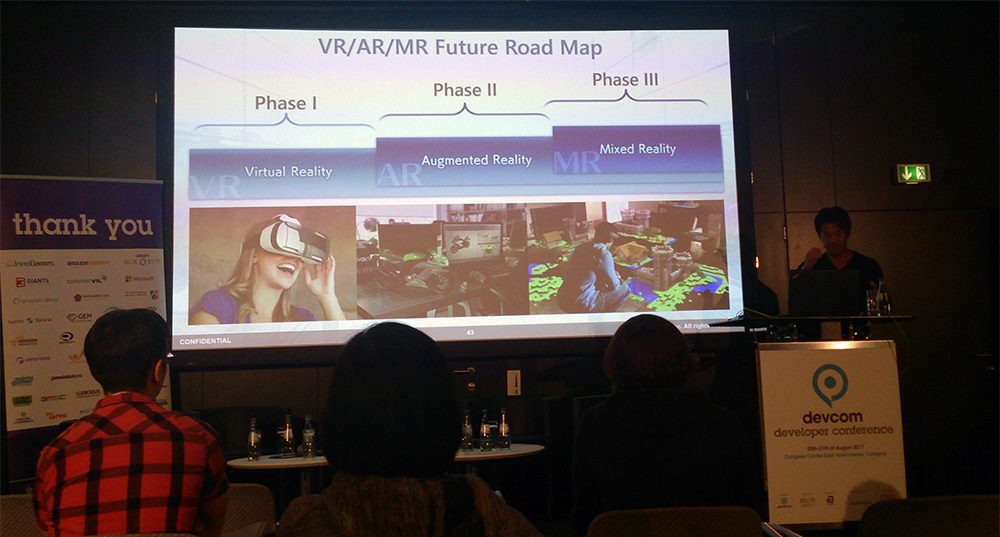 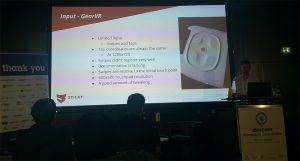 Locomotion is still a big issue for game designers, despite the proven feasibility for handling this problem in productions like ‘Resident Evil VR’ at the beginning of 2017. Financing went through a disappointing period after low sales reports of headset distribution became an issue a few months later. And technical restrictions in Mobile VR make parallel production of flat-screen games and VR games rather difficult in the VR market sector with the highest sales rates for headset distribution. Game developers still struggle with the new medium in a complicated learning process, whereas financing and market outlook begin to produce a certain consolidation after a heavy shock of disappointment in the weeks before the conference started. 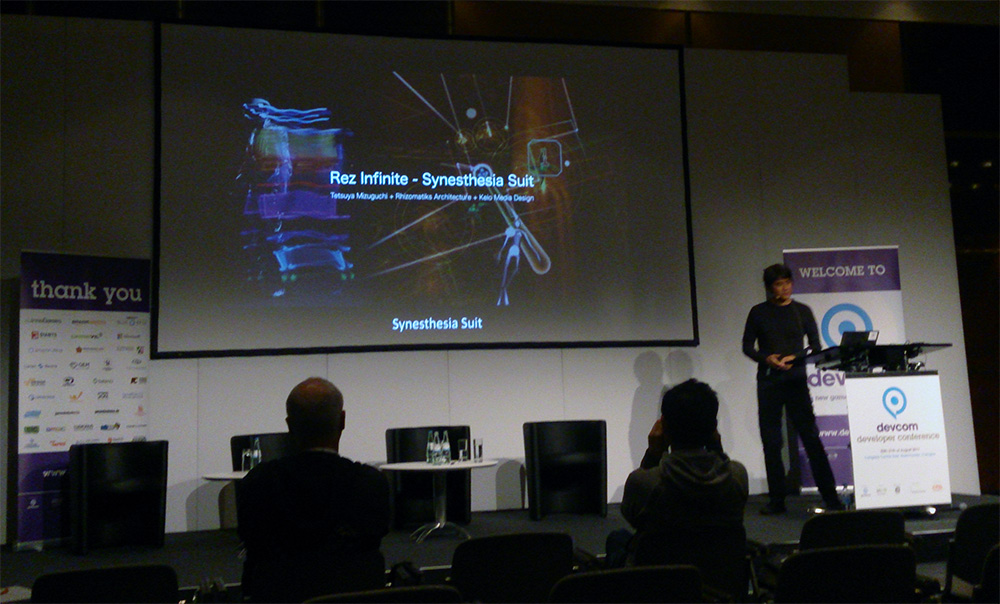 Rez creator Mizuguchi and his vision of full-body VR

The exchanges and vivid discussions gave insight on personal experiences for smaller development environments and offered advice on production details more than they went for the big picture of a new media future. Big players in VR were not present at both conferences, as no upgrading platform strategies were to be announced. Notably, Tetsuya Mizuguchi impressed once again with an overview of his journey from original Rez to his latest remake for VR and his outlook for full-body experiences in the future.

The absence of bigger players could also be felt on the show floor of the Gamescom trade show: Oculus did not even set up a booth. Sony made PSVR a sidekick for its main booth. Ubisoft only showed a flight simulator with headsets to the audience. At least, HTC Vive pepped up the AMD booth with an impressive number of cubicles for room-scale VR.

Content was king for VR this time at Gamescom, but this king was not ruling the show, yet. We could observe the entry of bigger content producers into the realm of VR. Namely, Bethesda showcased branded VR games like Fallout4VR for the Vive and SkyrimVR for PSVR. Croteam presented a VR version of The Talos Principle. Sony and Ubisoft came up with simulation brands like Gran Turismo for VR and a VR mode for Ace Combat 7. Despite the big names and brands, all these ports, add-ons, modes and variations of well-established flat-screen games could not convince me of really bringing VR forward. 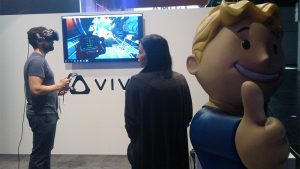 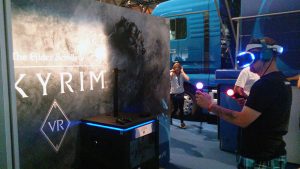 Their reputation may attract new audiences to the platforms, but their pre-established game mechanics only allow restricted handling of VR: Sony and Ubisoft played it safe with seated cockpit games. Bethesda offers only teleportation movements in Skyrim and Doom for VR. Where they go for full locomotion like in Fallout4VR, you still have to get along with a complicated menu selection procedure as interface elements originally made for the screen had been translated directly into VR. The Talos Principle made some adjustments for VR in handling objects but managed to stay very close to the flat-screen original – so close that I did not feel motivated to play it again in VR. 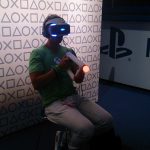 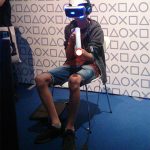 Nevertheless, VR seems to have been established as a game mode of its own at this year’s Gamescom. Sony promoted a whole range of controls dedicated to PSVR, from Dualshock to Move to Aim controllers. As individual locomotion still seems to be a little shaky, they focused more on shared online experiences like in Bravo Team for VR. But the PSVR performance lacked a bit of enthusiasm. Maybe this is the case because the new PS4 product line PlayLink is going for shared smartphone experiences now, or maybe PSVR is now on its tracks and just needs to be nurtured with a constant flow of translations of the established content library.

Peripheral promises at the sideshow

If the main platforms play it safe in the centre of the turbulence, it gets much more interesting to see what’s happening at the peripheries. There was a lot of VR to be seen all over the show floor aside from the big players: the indie area presented exciting and refreshing experiences, student artworks animated the business area, Chinese developers tested the European waters with their installations, and many smaller manufacturers of standalone headsets and VR peripherals showcased their innovative products. 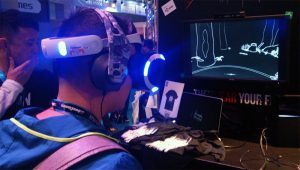 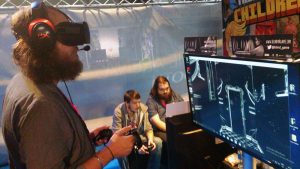 Another sonar game on PC: Blind

Two VR productions at the Indie Arena booth were striking out, both dealing with the same game concept and the same design: the player is supposed to be blind and unfolds a landscape in the dark by making noises. The microphone translates the noise into orientation waves, comparable to a bat’s sonar detection, and wherever the sound waves spread in the dark, an environment in white outlines becomes visible.  The gameplay reminds me of the ‘Unfinished Swan’ with a similar space concept and reduced black and white aesthetics. But VR enhances the room experience, and the visual orientation puzzle softens locomotion problems. Both games were fun to play and provided a unique, original approach to VR as a gaming platform. A bit strange, however, to see both concepts coming up at the same time with the same conceptual framework, stealing each other the show… 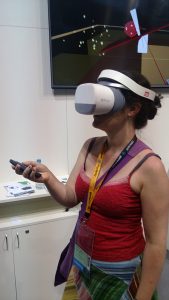 Pico presented a standalone headset comparable to actual mobile VR devices but powered by its built-in hardware instead of using a smartphone. The Goblin headset is very well-designed, sufficiently powerful for experiences on the level of Daydream or Gear VR, and with a price-point, under 300 Euros it can make VR more affordable for a larger casual audience. Another prototype with inside-out tracking looks promising and may become a real threat for PSVR and Oculus Rift in the future. 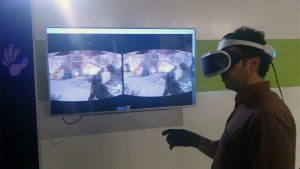 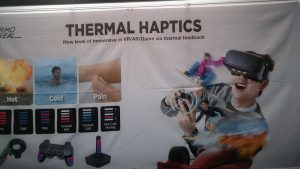 There were also a lot of peripheral products to be seen at the show. Most of them presented solutions for haptics and locomotion movement, like an affordable wireless glove, thermal materials reacting to temperature triggers in the simulation,  or treadmills as motion platforms for more advanced Arcade VR installations. 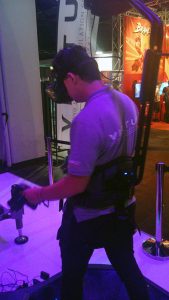 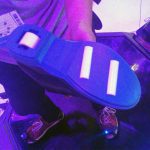 A Russian company affiliated to the highly successful online multiplayer platform of Wargaming.net set up a very impressing demo showcase for full-body VR experiences. They assembled HTC Vive headsets with motion capture tracking devices and presented an action sequence for 4 players who completely immerse into a virtual game environment made with Unreal. You first need to slip into the body tracking suit, then the experience is unique and very intense. Despite some serious tracking lags, there is no motion sickness coming up in such a complete simulation environment. There still is a lack of precision for button interaction, aiming and consistent body representation, but the demo clearly showcased the potential of such an all-encompassing approach coming close to a Holodeck experience. 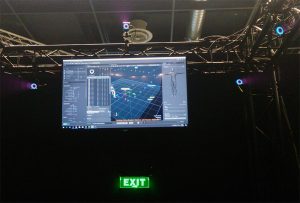 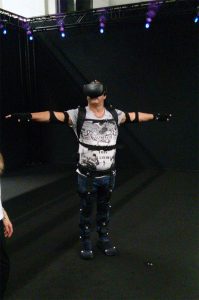 VR gets settled in a blind spot

Virtual Reality has found its place at Gamescom. Big brands are showing up, signalling certain maturity of the platform. Indie developers continue to map new territories. Innovative peripherals promise new dimensions of immersion. But bringing traditional brands to VR without renewing audience expectations maintains certain risks – as 3D games already showed before. And some independent innovation sparkles cannot shine a light on content being king – particularly not in the dark ages. For the moment, we can only enjoy playing games with a headset – like an echo sounder – without knowing if this will bring us any closer to VR. 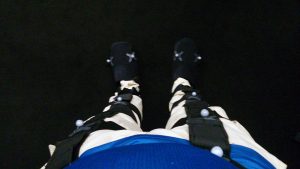