VR goes to market at Gamescom 2015

Virtual Reality was one of the main topics during Cologne’s game festivities around Gamescom 2015. GDC Europe and Respawn Conference laid the ground with making-of and how-to lectures for developers covering general introductions into VR, design and interaction issues, system architecture and rendering tools. And then Gamescom’s trade show and business area lined up all major VR companies with impressive demo booths open for the public. This event was the first major presentation of VR technologies to a wide audience of industry and hobby players in Europe on a truly massive scale (350.000 visitors in 5 days), and it could effectively demonstrate that the current state of VR is ready for market.

Sony started the VR presentations with SCEE Principal Designer John Foster’s detailed report on design tuning for the PS4 VR system’s demo experiences. He especially pointed out the balancing of different interaction techniques in the newest episode of The London Heist. During this car chasing experience, the player sits beside the driver of a van and has to shoot persecuting villains while being forced to reload his machine gun quite frequently. For the reloading movement individual move controls were combined with periodically automated ‘helpers’ working like magnets to facilitate object treatment with hand representations in the virtual space.

Valve Software continued the discussion on VR interaction design with a lecture focusing on SteamVR’s specific controllers, especially in comparing their functions to those of traditional gamepad controls. They also highlighted quite a list of dos and don’ts for VR developers to avoid game design causing discomfort for the players.

The usual elephant in the room was VR’s most consistent and loyal media companion with the popular topic of motion sickness. An excellent lecture summed up all details for a design framework to reduce or even avoid motion sickness on the visual scope. But the lecture ignored the probably even more important role of intuitive orientation in virtual spaces where controllers and interaction devices come into play again. 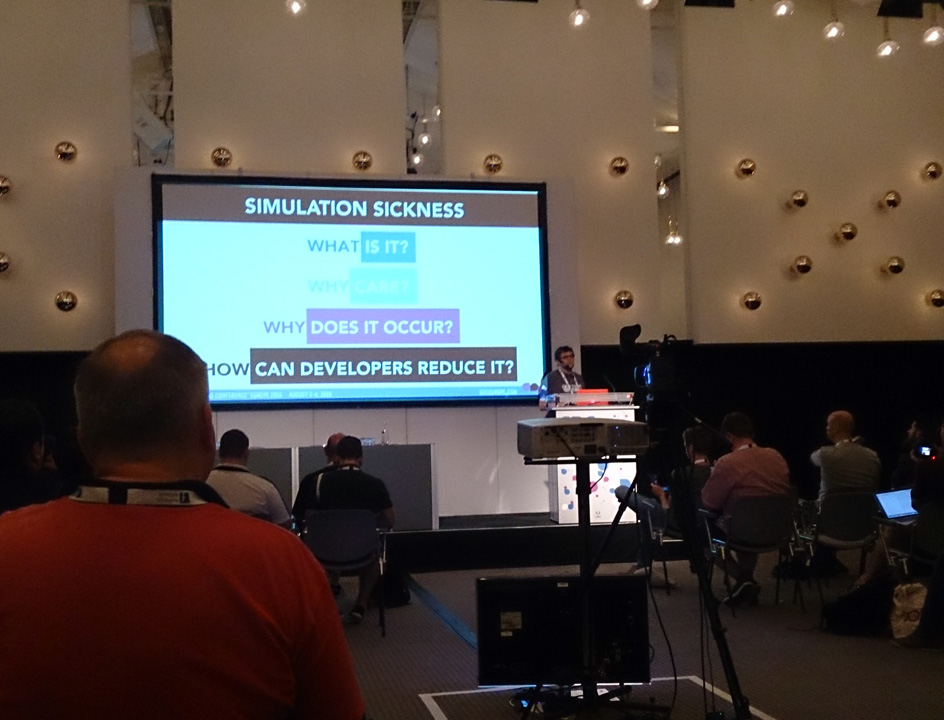 The Respawn developer conference displayed more general introductions into VR which could be followed by audio switching while wandering from speaker to speaker.  Together with Respawn, this year’s GDC Europe offered a highly competent motivation for game developers to hop into VR as an alternative track to overcrowded mobile markets and diminishing retail platforms. The presented production experiences and orientation frameworks were up to the point and clearly communicated – as long as they referred to traditional ways of doing games with these well-known little buttons the industry based all business models on so successfully.

By playing down visual motion sickness and levelling up preconditioned developers with established orientation frameworks, the game industry seems to pull one elephant out of the room just to make a place for an even bigger one showing up behind the first: the not yet fully controlled world of new and unknown territories.

Gamescom: play it on, keep it safe

Whatever you learned at GDC and Respawn about VR design, you could immediately test it on the trading floor where all previously mentioned VR platforms demoed to the public without dying.

Sony had a strong line-up of Project Morpheus systems with game experiences for seating with gamepads, multi-players and Move controllers. The Morpheus headset works fine as a robust and light helmet where you can clap down and up again the display for your sessions. Image quality is sufficient, and the construction is clearly fit enough to survive in the kid’s room until the next iteration of the headset comes out. Depending on the experience and the game design, PS4-gamepads can work well with surrounding visuals, and Move controllers are definitely able to reload a gun during a thrilling car chasing ride on London’s highways. 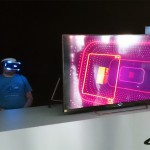 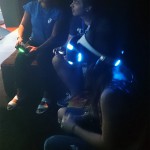 Oculus had a big booth to show off their new CV1 and Gear VR. The Rift consumer version feels light and fits well even for people wearing spectacles. Sharpness and vision correction seems to be done with the head strip which may be a bit cumbersome to do every time you use the headset. The range of games was impressive in numbers and variations, but they were all presented with the Xbox wireless controller, whereas the new VR controllers could be seen only under glass boxes. Image quality, robustness and comfort are fine, and I liked wearing the headset during the 10 minutes demo time while running and jumping in a snow cave to master an escape from monsters and falling ice rocks. 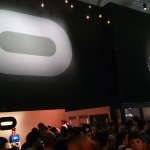 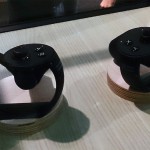 Valve had prepared installation boxes for their SteamVR together with HTC and Nvidia. Everyone who could experience a demo time slot probably rushed home afterwards to make a place for a 20 square-meters hobby room for the next VR vacations. The system is clearly high-end in quality and control, and it is certainly the most complete and detailed system platform of all VR systems up to now. The demos impressed with excellent image quality, seamless interaction and a stunning re-encounter with charming GLaDOS in Portal’s cyberworld. The headset is comfortable and stable, although the bulkiest of them all. The controllers may look a bit awkward, but their highly accurate real-time interaction is absolutely intuitive, and they are very light in the hands. 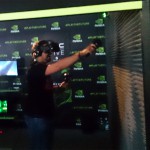 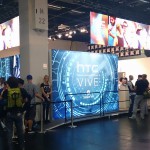 For the more traditional Portalists, the German company Zeiss presented smartphone holder VROne and superior lens technology in a popular booth, where you could play the original Portal in VR mode. 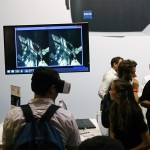 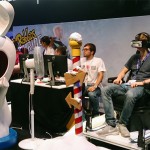 Ubisoft explored the screaming business with a VR ride based on their popular Rabbidz game franchise. The non-interactive but highly enjoyable motion ride with Oculus Rift headsets catapulted the viewer into a funny cartoonist winter landscape with crazy Rabbid companions.

Ready for the market: safety first

All companies showed impressive VR systems that seem to be ready for market in the very near future, and the industry can count on a sufficient variety of devices for different customer target groups, all curiously queuing up in Cologne. Gamescom 2015 served as a presentation platform to developers and consumers for a first looking and touching and riding. The presentations focused on new hardware and old concepts. The demo installations convinced in terms of robustness and comfort, but the handling of contents remained rather cautious.

Sony had a wide range of application scenarios connected to familiar gaming concepts. Oculus starts with an offer of typical game categories and an Xbox controller. Valve counts on system advances with pre-established IP.

For a first glimpse into the near future, it seems to be appropriate to present novelties without scaring off too many developers and gamers. But right after the first excitement, both of these application groups start asking about sustainable added value for their gaming experiences, especially when pricing demands certain investments.

For a second glimpse into the future, these offers may fall short if not combined with innovative content perspectives nowhere to be seen at Gamescom nor being prepared at GDC/Respawn. Otherwise, these baby steps risk ending up in Head-Mounted Gaming, leaving VR experiences incomplete and quickly coming to a dead-end like in 3D gaming before.

Virtual Reality is ready for the gaming market, that is an encouraging message from Cologne! Now, the gaming industry needs some encouragement to get well with notorious innovation sickness.

All images: copyright 2015 by Jochen Schmidt; except for the Sony Lecture (copyright by GDC Europe/SCEE)