After a no-show at CeBIT and a low show without VR at Gamescom, Microsoft chose IFA in Berlin to be the stage for the upcoming Windows Mixed Reality program: keynote presentation, Windows Creator Update and a whole range of headset releases underlined Microsoft’s engagement and strategic approach to VR, MR and AR. With such an impressive line-up of announcements by this software giant alone, Virtual Reality quickly became the main topic of the show. But there were also other things to be seen about VR at this year’s IFA apart from the big Microsoft wave. All these many activities made this year’s consumer electronic show the most informative indicator on the actual state of VR.

A Windows to Virtual Reality

Identical components inside, different designs outside

Microsoft put the main focus on the upcoming release of the Windows 10 Creator edition on October 17th. The OS update will be the launching platform for VR applications as well. Microsoft presented 5 partner manufacturers with headsets for VR on Windows 10, all equipped with Microsofts motion controllers and inside-out tracking systems based on the Hololens developments. The headsets from Acer, Asus, Dell, Lenovo and HP all operate on the same viewing and sensor framework. They only vary in the design of the outer parts and the systems to fix and adjust the headset on your head. All core specs for visual quality, hardware requirements, weight and tracking devices were on the same line. All headsets use a 4-meter cable to the Windows PC and headset cameras for tracking the LEDs of the standard Microsoft motion controllers.

Inside-out tracking worked well with the motion controllers. The field of view had been slightly reduced in comparison to Oculus or Vive headsets. My first viewing impression reminded me of a field-glass viewing spectrum because of this narrowed FOV. But when starting the interaction and handling of virtual objects I quickly felt immersed in the simulation. All headset manufacturers presented the same demo setup with a ‘Home’-like menu platform where you could teleport into different rooms and choose your demo apps.

5 types of headsets with motion controls

I played an interaction puzzle and the wave shooter Space Pirate Trainer, originally made for the HTC Vive on SteamVR, on all 5 proposed headsets. I had no major issues with inside-out tracking. The controllers worked fine with interaction concepts we already know from Oculus and the Vive. As you move head and body in normal gameplay, the controllers mostly stay in sight of the tracking cameras integrated into the headset. I am not sure how this works with tennis-like sports simulations where you look at your opponent’s spot while trying to hit the ball at your side. I also do not know how well painting and modelling in VR work with this system. The headsets are well-designed for VR development with switching functions between VR mode and screen mode. In general, I see the Windows Mixed Reality systems on the same level as Oculus or Vive. Tracking quality with PSVR will have to be compared in more gameplay modes. 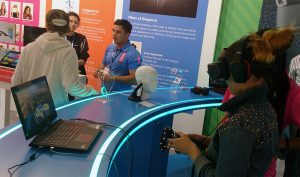 All headsets were shown on the trade floor 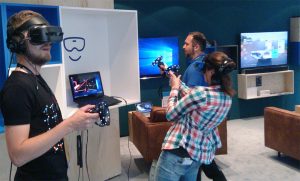 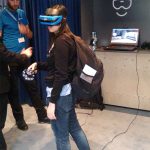 A striking difference to competitive products was a better resolution of the Microsoft headsets for reading text elements in VR, due to the squeezed FOV. This trade-off makes it possible to handle menus better than in the Vive, Oculus or PSVR. This also shows the close relation of the headsets to Microsoft’s operating system, and it may point to a more multimedia related application scenario of Windows Mixed Reality in contrast to the clearly game or event-oriented focus of the competitors.

Next VR at IFA Next

IFA’s innovation segment also presented quite some interesting developments for future VR. The Chinese-American company Pimax showed a very impressive headset with 8K resolution and a 200° viewing field. In comparison to actual high-end VR, this headset felt like an IMAX to normal cinema screens. But I could not be very interactive with the Vive-like controllers in my demo scene so that I do not know if Pimax can maintain this impressive visual quality also with heavy interaction in VR.

Start-Up slideshow in OR 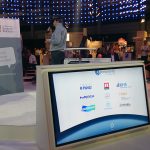 At this year’s IFA, you could find headsets and glasses in every hall of the show: product line-ups from Microsoft, demo showcases with Oculus or Vive headsets, smartphone holders with SteamVR access, AR/VR and 3D scanning functionality as main components in premium smartphones, VR Arcade installation platforms, drone control goggles, massage and meditation glasses, toys and gaming devices. Sony, most notably, presented its very successful Playstation4 not as a traditional gaming console but as VR system with upcoming PSVR releases for the holiday season.

Original combo of PSVR and OR, made in China

In the Global Market section at The Station you could also compare manufacturing costs for VR headsets and have some fun with rather original VR gadgets. You could also find interesting combinations of established tracking and viewing systems in cheaper versions made by Asian manufacturers. And you could discuss market differentiation on a global scale by comparing product strategies in selected spots on the globe. For example, Lenovo made a big show with a Star Wars-themed smartphone holder for not really convincing lightning sword combats and promoted the product as an AR toy system for 300 Euros. You could find a similar smartphone holder in Global Markets with cute animation characters and simple cardboard guns for interaction for about 20 US Dollars – and the latter ‘AR toy system’ even fitted better and was so much more fun!

The current state of VR: sale or scale?

With the entry of Microsoft into the domain of VR by means of Windows Mixed Reality, the picture of the current state of VR finally gets more complete: Microsoft seems to have the most detailed and long-termed strategy, built around its Windows core product with optional expansion onto the Xbox gaming console later and a far-reaching focus on AR with the Hololens. Sony successfully established VR for its core product PlayStation4 and may come up with more activities in this field in the future, operating in a less PR related mode than Microsoft but certainly with a long-termed strategy as well. Facebook/Oculus and HTC Vive have set up their shops for expansion into the internet or for a buy-out.

Home entertainment for sitting ducks: PSVR runs in seating mode with Aim controller and a smartphone helmet for cinemascope in splendid isolation

All major players have in common that they built up their systems attached to their existing business core, making all solutions a half-breed between headset expansion and traditional multimedia mechanics. They actually set up a standard for VR remaining closely to established business frameworks instead of going for an innovative platform on its own. From here on, they either have to stifle each other with price wars until the double nature of their achievements breaks into pieces – or they have to scale up their ambitions in reaching out for an ampler scope of opportunities.