This year 2016 is supposed to become the launching window for market-ready VR systems, and the game industry’s biggest event show got ready for window dressing just in time. Together with the Game Developer Conference Europe and the Indie game gathering Respawn, Gamescom 2016 provided an overview on VR’s actual market standings and future preparations: Sony’s PlayStation VR went life at the trade show, Oculus Touch got touchable at their booth, and HTC Vive showed up on many sites in the Köln Messe as a demo technology for technology providers as well as a platform on its own. VR is livening up for premium home entertainment now, but how far VR can go on living in this demanding market environment could only partly be seen in Cologne.

Respawn: the gathering of Vive developers

VR developers had to gather at Respawn this year – the indie platform clearly dominated the VR wave in comparison to the parallel industrial conference GDCE. Respawn offered lectures, discussions and demos on VR, mostly related to HTC Vive development and Mobile VR. The Vive system has made a successful impact on indie developers with Valve’s give-away strategy and developer support. However, the actual outcome still remains in pre-established showcases like VR Unicorns’ sports games and ‘Lucid Trips’, already been shown around at major conferences throughout this year. 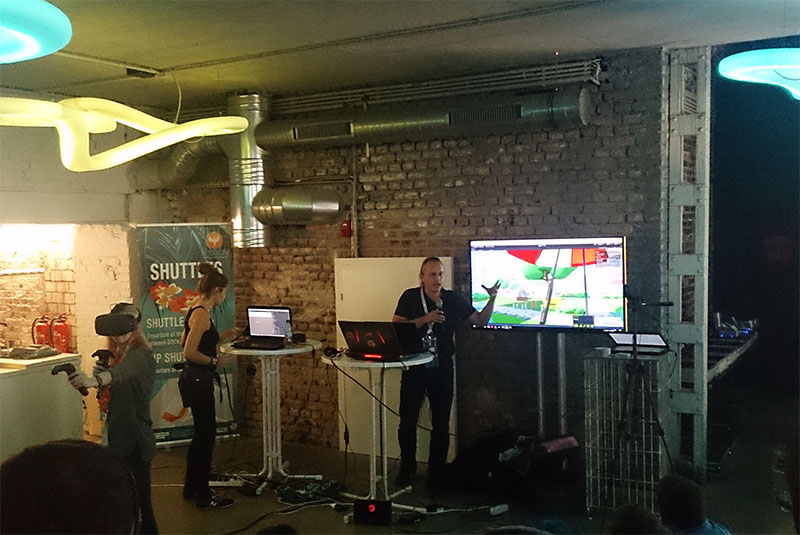 Even if the makers’ talks were highly motivated to jump on the VR wagon, it has to be noted that all these experimental and engaging efforts cannot match with Valve’s proper demo productions for the Vive system in terms of player communication, graphic design and space management.  ‘The Lab’ is by far the most popular application on SteamVR, not only because it is free but also because it is supposed to be a starting point. Indie productions may add additional interaction concepts where Valve is still holding back, but they certainly do not have the possibilities to tweak the shaders like the Half-Life developer. The question remains if sales figures of a 2000 Euro VR-system can be pushed decisively by offering Wii experiences or upgraded mobile games. The Vive system clearly is the most advanced VR system for home entertainment, and independent developers move into this play area first. But the elephant in the Vive room is the fact that, up to now, a true platform mover probably can only come from the platform holder himself.

Besides the sport experiences on the Vive, I could find more VR fitness for Mobile VR at the Respawn show floor. Tower Studios’ Sensible Soccer series is reviving for a cross-platform release on mobile, desktop and VR as Sociable Soccer. Although the game only uses VR for 3rd person perspectives to oversee the pitch in a stadium, this view enhances the experience in combination with speedy gameplay and remarkable physical game mechanics. Sociable Soccer sticks with classical gamepad controls and fixed camera viewpoints, and nevertheless demonstrates how VR can be used effectively for enhancing a simple but well-composed gaming experience on existing gaming platforms. 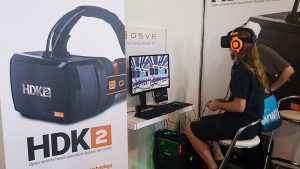 OSVR exhibited the upgraded version of Razer’s modular VR headset. It now comes close to the standards of the other headsets, making it a more realistic choice for truly independent open source production and educational VR development.

The more industrial one of the two parallel developer conferences cared about publishers more than developers this time. No big VR brand was present in the conference program. VR related lectures were linked to Vive developers coming over from Respawn or presentations on psychological sciences and on market research. 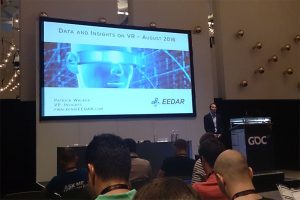 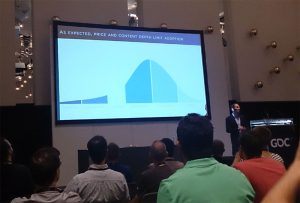 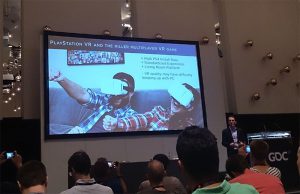 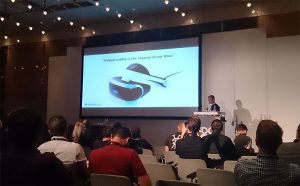 Especially the market analysis should have interested anyone planning to enter the VR domain. The numbers were confirming the actual starting situation for the market, but the outlooks were promising in the wake of two big players appearing on the scene, Sony with PS VR in the console domain and Google with Daydream in Mobile VR. The industrial market takes shape for a more predictable and robust period of system installments. However, the predictable hint to a gap between the ongoing VR market establishment and a later VR mass market could be figured out as well, rendering the upstarting situation for VR economics still an unstable one for the years to come. 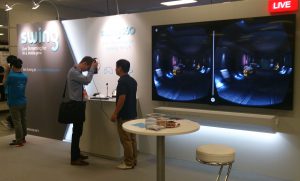 Swing aims to become the Twitch for VR

Some presentations on the show floor of the GDCE already took a run-up to overcome this gap: South Korean company Swing is starting up a service for watching VR gaming live on the internet as we know in video gaming from Twitch. Intel showcased a practical scanning solution for photo-realistic avatar generation with the possibility to integrate the avatar seamlessly into gaming engines for further applications. 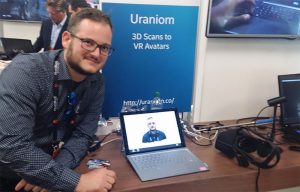 VR was present on all levels of the Gamescom trade show this year, on the public floor, in the business area, at Gamescom Congress and at many individual booths for attraction design. 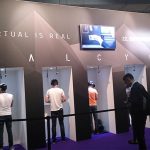 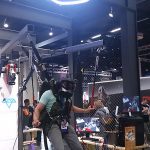 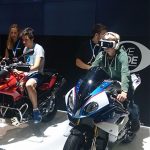 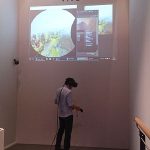 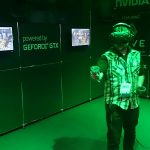 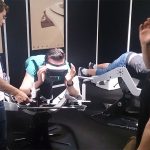 Sony set up an impressing lineup to promote PlayStation VR with a separate VR booth and many VR stations. The final edition of the PS VR headset feels a bit heavier than the prototypes before. A rather solid mechanism for adjusting the visor is causing the extra weight. This brings the headset even closer to a helmet now. On the other hand, the display and graphics quality has gone even better. There is no screen door effect anymore, and no light is coming in. You can easily adjust the headset even wearing your eyeglasses, and nothing distracts you from entering the virtual realm.

Sony’s content lineup confirms the positive outlook of GDCE’s market predictions: RIGS, Batman VR and Farpoint were the most popular among the VR games to see. Given the 399 Euro price tag of the headset, the broad distribution base of PS4 owners and the action-oriented content offer, there is little doubt that PS VR will sell well for the upcoming holiday season. 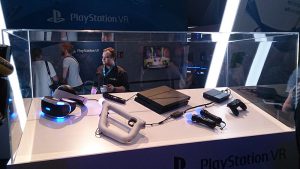 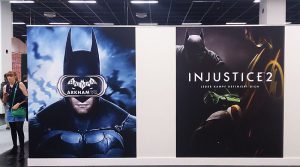 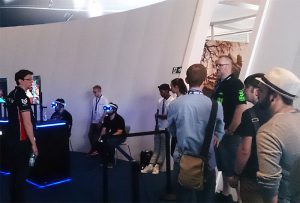 I could play Batman VR, Here they lie, Resident Evil VR, Hatsune Miku and Robinson’s Journey myself, and I had a look at some shooters, horror games and multi-players at the PS VR booth. Technically, all games worked fine and provided easy access to immersive experiences.

Batman VR maintains rather high quality in graphics in comparison to the brand’s gaming standards. ‘Here they lie’ surprised with surreal horror environments forcing you to watch your back. ‘Resident Evil VII’ adds a VR mode to the original series, and the clever reuse of the same material provides extra replay value. ‘Hatsune Miku’ simulates a virtual concert event where the player can join the rhythm interactively to come into closer contact with the stage performance. Crytek’s ‘Robinson’s Journey’ displays the beauty of immersive landscapes in combination with gamepad-friendly button controls.

All content offers to focus on game experiences, maintaining restricted interaction via gamepad or simplified motion control while offering visual intensity with the headset. PS4 gamers will certainly hook on to this added value gaming experience. But in terms of continuous immersion and more physical interaction, the PlayStation system could reach its limits rather soon. Apart from the competition with more affordable PC competitors in the near future, the Move controllers do not track precisely enough to facilitate the shift from added value gaming to more comprehensive VR experiences. PlayStation VR will have a jump start for sure, but this may not be propulsive enough to overcome the gap between their core gamers and the much broader mass market in VR home entertainment. 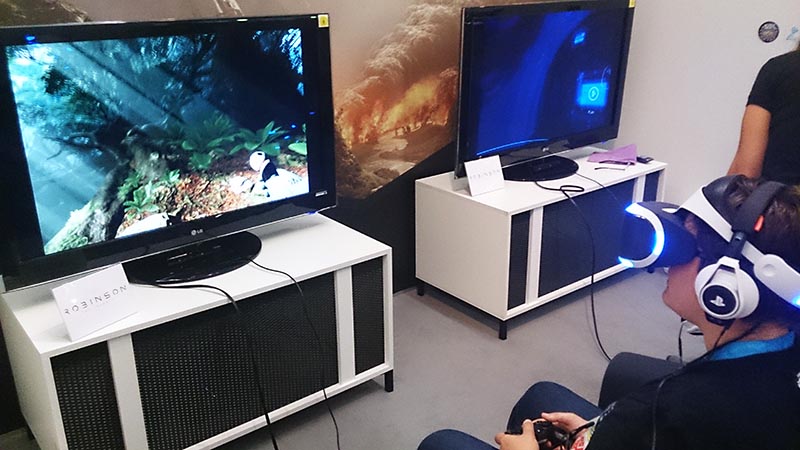 What a difference it makes between a half-baked VR game and a complete VR experience, I could see at Crytek’s booth with ‘The Climb’. I had played this game for VR with gamepad controls before, but in Cologne, I could play it with Oculus Touch controllers – and everything changed from a pain-in-the-neck gaming mechanic to a challenging physical movement experience! 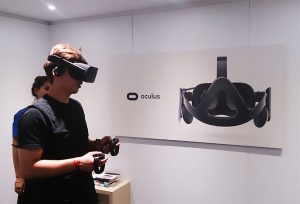 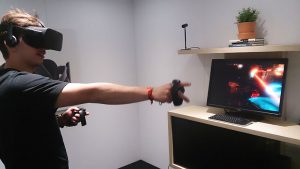 At the Oculus Rift booth, I played a wizard combat game by means of two Touch controllers: you confront your opponents and throw fireballs and other magical spells at them while protecting yourself with a shield and teleporting between strategic points in the battle arena. Although this game is much more action-oriented than ‘The Climb’ the restricted interactivity with button pressing movement jumps and Wii-like throws again made me feel much more playing a game than entering virtual reality. No matter how smoothly I can look around in real-time, the button controls and game-oriented interaction design make the VR experience only half-life.

This was also the case for two stunning experiences at Ubisoft’s show booth: Eagle Flight VR is a gaze controlled capture-the-flag multiplayer where you steer your bird character by means of your head movements and shoot with a gamepad. It’s a fun game, but it also remains only a game – you gain a little more immersion at the expense of adapting your head movements to mechanical control devices, resulting once more in a pain in the neck. 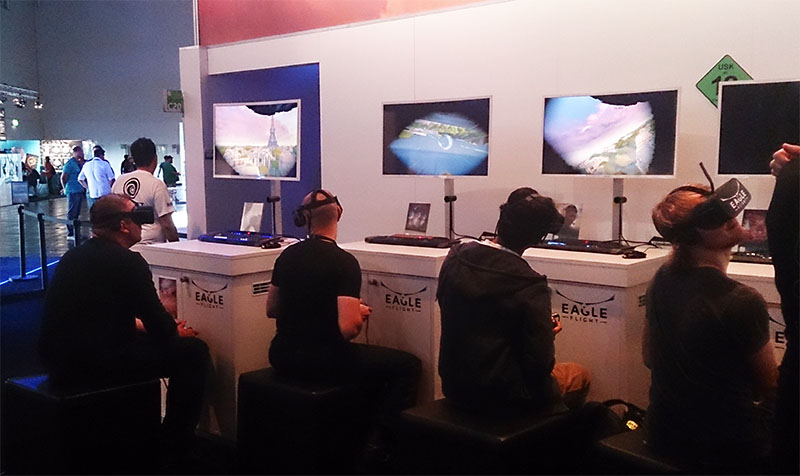 StarTrek: Bridge Crew is a cooperative VR multiplayer putting you in the role of a StarFleet officer on the bridge of a starship. Together with other players as crew members, you have to accomplish ship management tasks by means of steering the ship with Touch controllers in your hands. You have the stunning emotion to be really present in a virtual Enterprise with all the details and activities you know from the TV series. But once again, the game design pulls you back from the holodeck future into the age of mechanics as you could use your intuitive touch controllers for nothing else but pressing virtual buttons on the bridge’s control board.

Ubisoft’s approach to VR with multiplayer experiences can become a real cracker for cosplayers and binge-watchers wanting to look deeper into the screen. In combination with strong brand worlds like StarTrek, this concept has a huge potential for mass adoption. But in terms of VR conception, the gameplay mechanics still hold you back in the old times of video gaming. 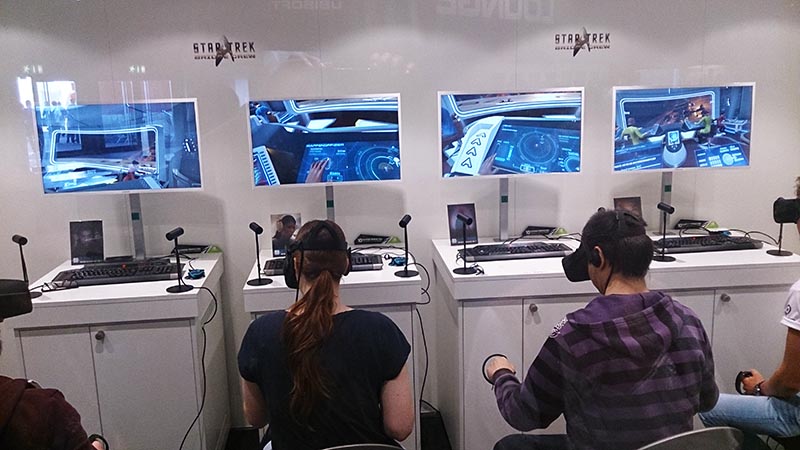 This year of 2016 is becoming the launching window of home entertainment VR, indeed. At the moment, it is a window you can only put your head through to look around while the rest of you deals with old school mechanics – and with expectations for Half-Life VR, that actually can be met only in form of a prank.

Given the half-life in this extremely speedy and demanding consumer market and putting it into relation with the half-life of the gaming industry’s extremely persistent business constraints, we can only predict an upcoming gap when the launching window closes next year. Be prepared for a jump into the rabbit hole! 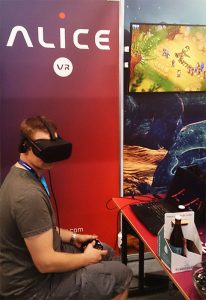