This year’s IFA presented only a few novelties in the show’s main theme area of television and home entertainment appliances: flat screens start to compete with computers for smart home dominance now; the health and fitness sector gets digital with wearables on a large scale, and Virtual Reality may offer everyday usefulness besides gaming applications.

In comparison to this year’s bigger gaming events, VR appeared to be present in a rather restrained mode at Berlin’s IFA: lots of Mobile VR sets could be seen all over the show booths, mostly in partnership with industrial appliers. Only a few of them had their own booths. This seems to signify a turn to marketing application now after the first wave of technology demonstrations had been rolled out before.

Especially Zeiss’ VROne could be seen at booths of telecommunication companies, kitchen distributors and press editors of special interest magazines. 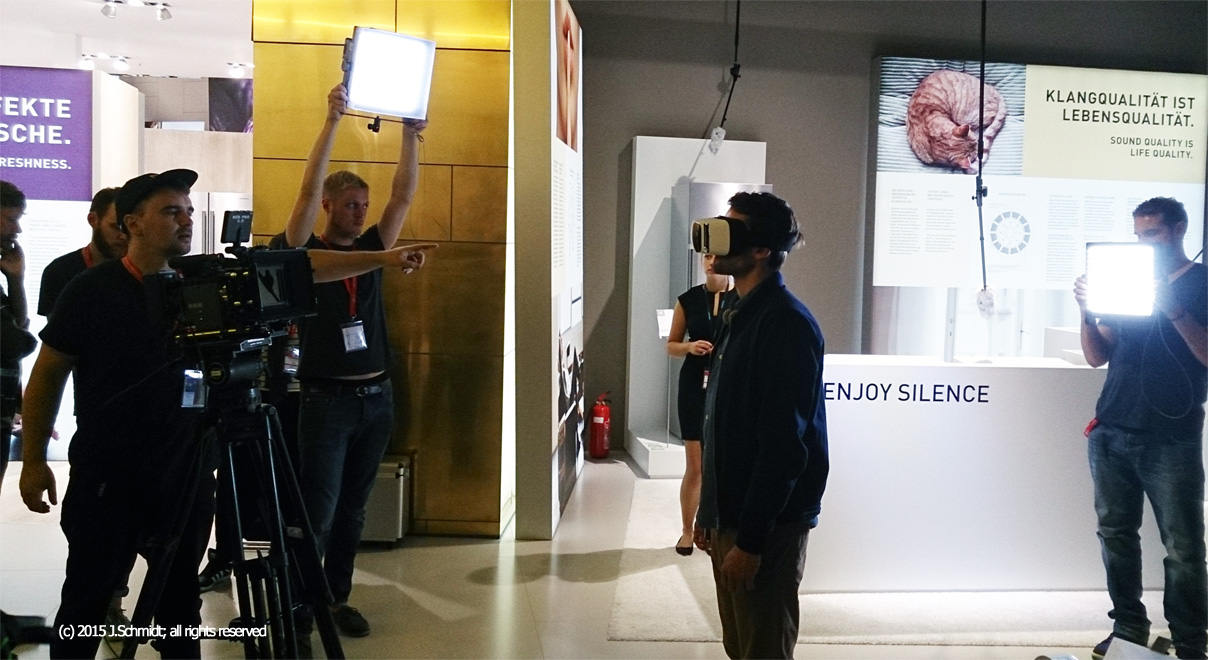 Zeiss VROne in the spotlight: a filmmaker tries to communicate with an immersed model – by gesticulating in front of his blind spot…

Samsung had a huge appearance at last year’s IFA with the world premiere of its GearVR headset in an exclusive premium hall of the show. This year, Samsung continued with a premium hall presentation, but you needed to look out for GearVR very carefully among all other Samsung product lines of Smartphones, TVs, kitchen equipment and fitness applications.

GearVR had been transferred to the corner of business applications for teleconference systems. You could have a look into a simulated office environment where an integrated video screen mapping made possible face-to-face telecommunication inside the virtual world. Technically interesting, the demo quality could not even match with Oculus Rift’s standard desk demo (without integrated video). At least, I could use this everyday office application with my everyday glasses now, whereas last year’s edition did not work for my glasses at all. 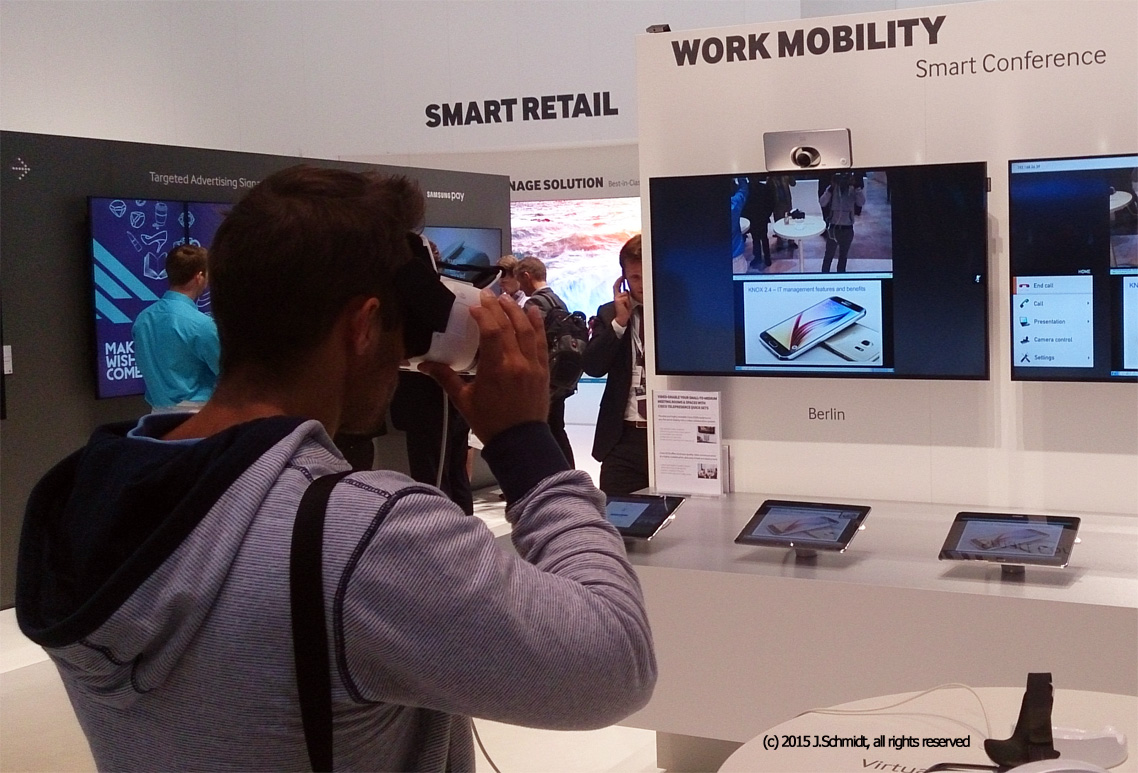 GearVR wants to be used in the office for telecommunication conferences

HTC Vive set up its usual demo booth known from Gamescom already. After partnering with Nvidia in Cologne, they presented a second demo site at Intel’s booth in Berlin. The demos were similar to the gaming demos already known, but you could also experience a kitchen simulator known as the’job simulator’ and an archery simulation. The two additional demo applications were more impressive for interaction than they could impress for visualization. You could reorganize the whole kitchen by moving elements and tools in a visually simplified Unity3D setting, recalling the good old days of teapot computer graphics. The archery interaction was very accurate using the two controllers for grabbing arrows from the quiver on your back, setting fire on them, aiming and shooting with accurate tension again. The visual quality reminded the first edition of Zelda, though… 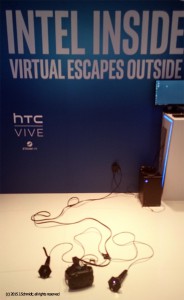 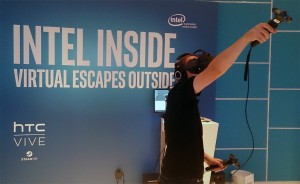 SteamVR with kitchen steam and green arrows at Intel’s booth 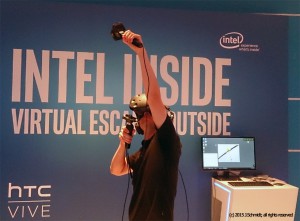 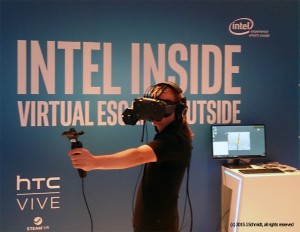 Oculus Rift could be seen with an upgraded roller-coaster demo at the c’t booth, just like last year – with considerably less waiting time for this year’s show, due to much shorter queues. 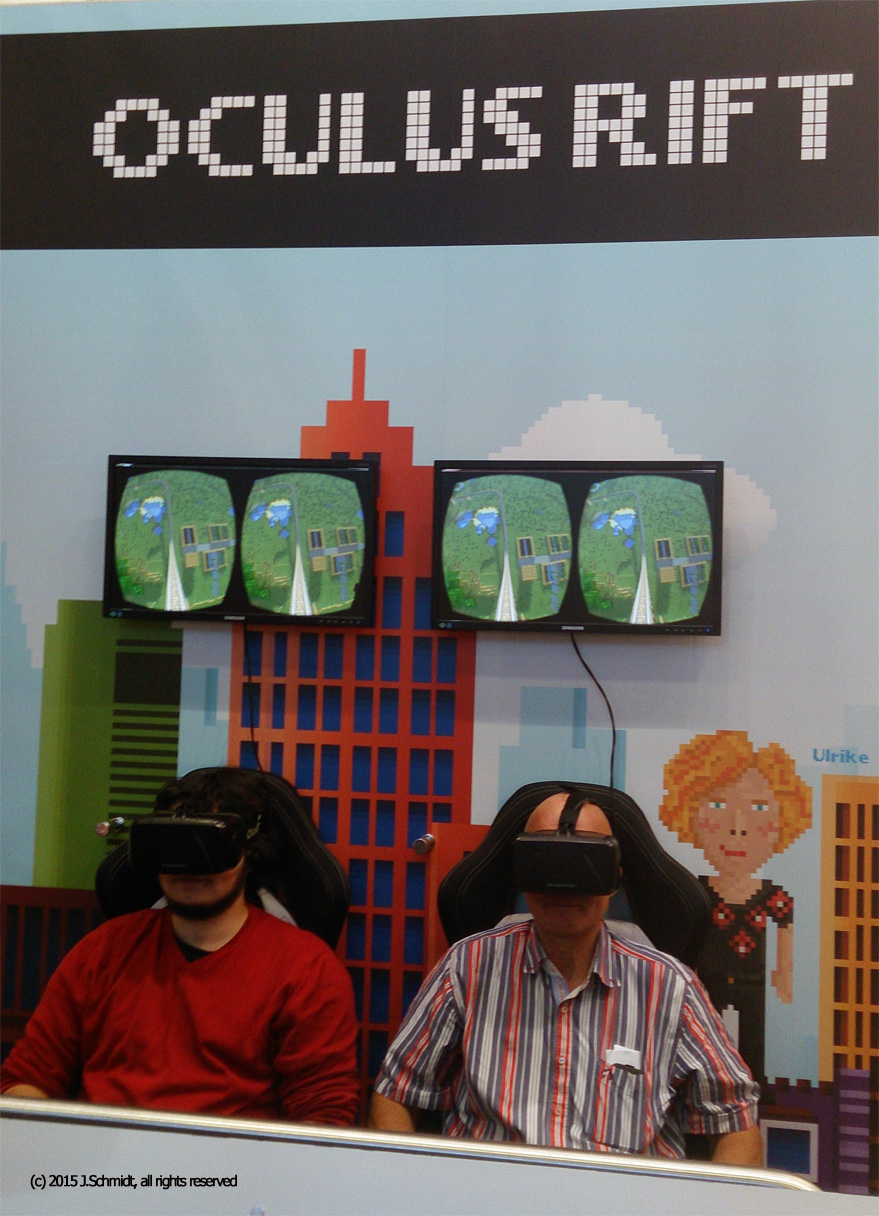 The great classic: roller-coaster once again

Finally, the Sony hall reserved a back-room for public presentations of PS4 Project Morpheus demos as the ‘Future of Play’. The demo line-up focused on limited headset apps: a multi-player for kids and a football penalty game where the player uses headset moves for control inputs; and a flight simulation from ‘Eve Online’ with wireless controller inputs. There was no demo to be seen with Move controllers to present Sony’s whole system approach for the PS4. 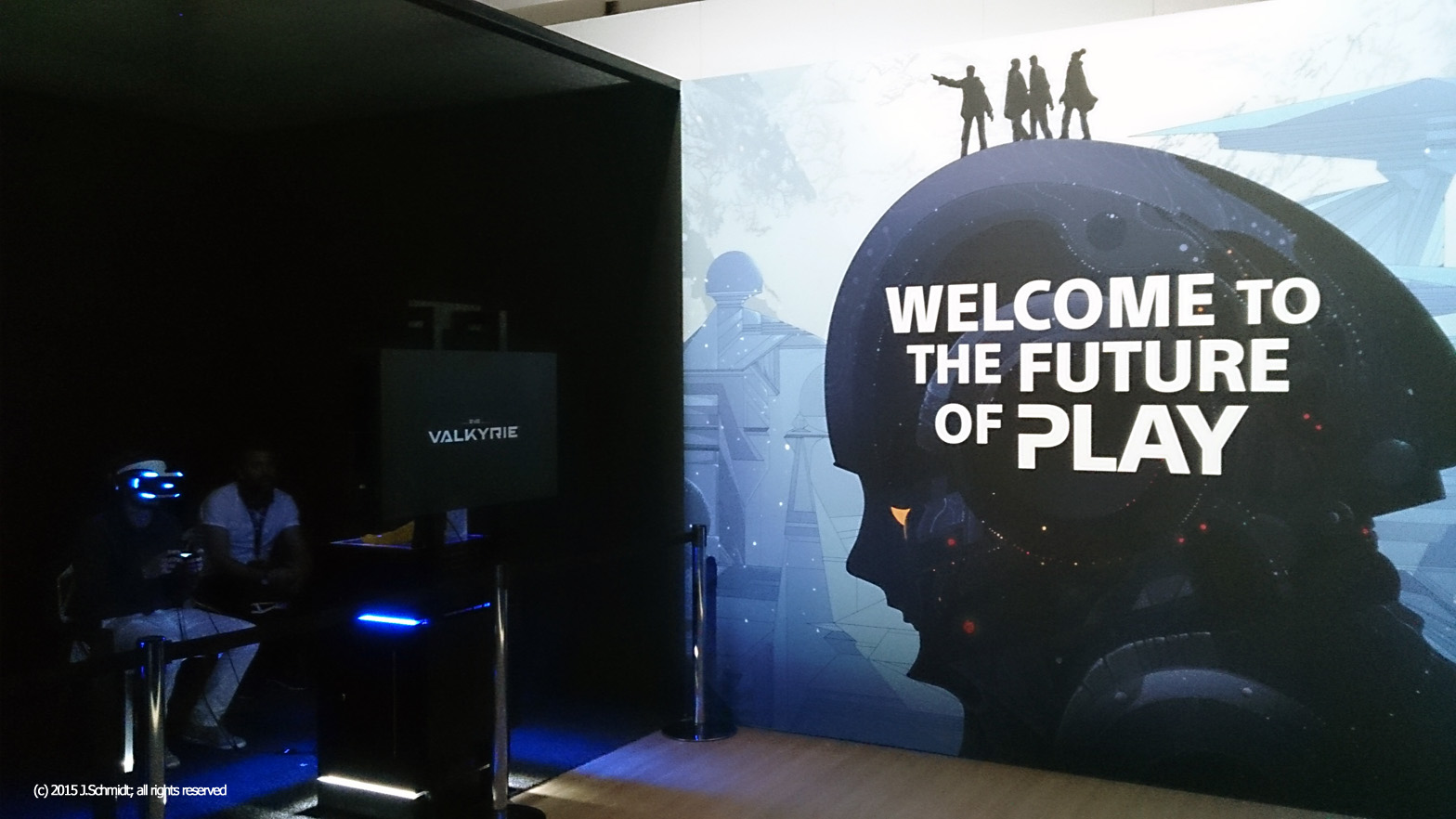 Virtual Reality could be seen at this year’s IFA in a more general application perspective than with its usual connection to the playground of gaming applications. Some ideas could be promising for VR daily usefulness in working and home environments. But the demo quality of more serious application scenarios remains in a prototype state and the visual quality drops decisively in comparison to more entertaining visions. Given the quality of actual environmental and architectural simulations to be seen in current engine demos, this presentation level has to be taken as a step backwards in comparison to what can be done with VR already today. Maybe the daily use of VR is not tangible, yet, for more engagement in demo quality. But I could imagine we will be able to experience wild rides through washing and dishing machines already at next year’s IFA show in Berlin…